Home Of The "Red Barons"

"We sleep safely in our beds because rough men stand ready in the night
to visit violence on those who would do us harm."
-- George Orwell

In a recent interview, General Norman Schwartzkopf was asked if he didn't think there was room for forgiveness toward the people who have harbored and abetted the terrorists who perpetrated the 9/11 attacks on America. His answer was classic Schwartzkopf. He said,

"I believe that forgiving them is God's function. Our job is simply to arrange the meeting."

The 201st Aviation Company, while in Nha Trang, came to be known by the call sign "Red Barons" after the infamous Baron Von Richtofen's squadron of World War I. The 201st provided continuous and immediate combat support to U.S. and Allied Forces in the counterinsurgency effort. Flying missions over enemy occupied mountains and jungles, the Red Barons created a legacy which instills pride in those who endeavor to carry on the traditions of the unit's combat heritage.

The Army had a rule if you came back to the states, with less than six months to go on your enlistment, you would receive an early out. In addition when you extended in country for six months or more you could choose the unit you wanted to serve with. With these two rules and the our location, on the beach at Nha Trang, the 201st. ended up having quite probably the most combat seasoned air crews of any unit in Vietnam.

VIP missions flying Generals and full bird Colonels throughout II Corps. to get a look at the action and pow wow was a daily occurrence for someone's bird. It was the 201st. who flew the Secretary of Defense on one trip to Vietnam and the Commanding General of MACV had his own Helicopter operated by the 201st. The wide area of operations, the experienced crews, and the unlimited variety of missions, made this unit a great unit to work for.
Have a Commander that needs to get back to his firebase under siege? A General who wants to have lunch with the Nuns at the Leper Colony in Qui Nhon? A CIA or MACV team that needs a lift? An American Band that needs a ride or a General who wants tomatoes from Dalat? Call the Red Barons!

Although most of our equipment was UH-1 Huey's we also had U-21's, read A Pilots Dream" from Hawk Magazine 1969 from the First Aviation Brigade's Website. 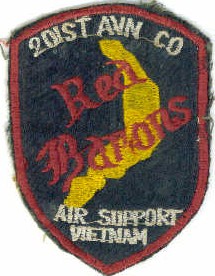 
If you served with the 201st. please REPORT!

Click on Snoopy, Give the Gift of Life, Become an Organ Donor Today. 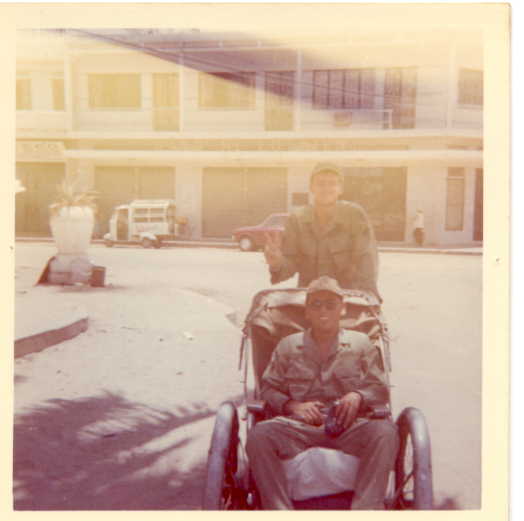 Woody (standing) and Rosco taking a day off downtown Nha Trang. Now I don't want to tell stories but I went with them to take this picture and learn what a day off was all about!


Visit the units we flew with, for, and supported. I really wonder if there was any helicopter unit in Vietnam that at sometime during the war didn't have a representative assigned to the 201st? Maybe we'll find out in a couple of years?